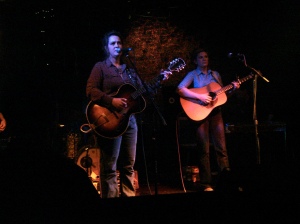 A (not very good) photo of Catherine Irwin & Janet Bean from a Freakwater show in Atlanta (November 2005, I don’t remember the venue)

Freakwater appeared on Bloodshot’s first compilation album (way back in 1994), and subsequently was on Thrill Jockey for years. BUT coming in February 2016, according to the Freakwater Facebook page, “We will be releasing our eighth studio album this fall with our dear friends Bloodshot Records!!” So… since I wrote a dissertation on Bloodshot Records and all, and what with loving Freakwater, I’m really, really, REALLY excited about this.2   As Bloodshot noted today, you may have thought that Freakwater was already on Bloodshot, but this upcoming studio album is, in fact, the band’s first with the record label. You can hear the first single from the album here, and you can pre-order the album and/or get the 7″ single here.

The announcement of this single inspired me to listen to pretty much the entire Freakwater catalogue throughout the day today. As I listened to the song “Cricket Versus Ant” (Thinking of You, 2005), I was reminded of my most favorite chord progression, which is in this song: V/vi – vi, or III – vi, or a major three chord to the minor six. This song is in D Major, so the chord progression is F-sharp major to b minor. The first time it happens, the lyrics are “If it all goes terribly wrong” at 1:27 in the video below.

I have done absolutely no research on this progression; I just know that I always love it when it happens. I think I first noticed it when I had to play chord progression for a piano proficiency exam or something equally dorky, but I remember first LOVING when I heard it in a Dixie Chicks song, “Tonight the Heartache’s on Me” (Wide Open Spaces, 1998).3   This song is in F Major, and in this case, the magical chords are A major to d minor in the chorus. The first time it happens, the lyrics are “Bartender, pour the wine” at 0:47 in the video below.

Isn’t it great? Sure, there are other secondary dominants that are nice, but this one is by far my favorite (and the best). Hooray for a new Freakwater album & hooray for V/vi – vi! Feel free to share examples with me!

—
1. The same high school friend likely introduced me to Bloodshot, or at least I was with her at CD Central (a fantastic record store in Lexington, KY) when I bought that compilation album.

2. At this point, I’m probably more excited about the album, rather than the research possibilities, but that’s a topic for another post.

3. This is the first song I look for if/when I ever karaoke. Seriously. Feel free to judge me.

I first learned about The Byrds and Gram Parsons because of alt.country. My very first encounter with Parsons was a tribute album, Return Of The Grievous Angel: A Tribute to Gram Parsons (1999), featuring alt.country types and others (Wilco, Whiskeytown, Gillian Welch, Beck, David Crosby, etc.).*

My favorite tracks on that album are (other than all of them. seriously.) “Sin City” by Emmylou Harris and Beck, “$1000 Wedding” by Evan Dando and Juliana Hatfield, “Return of the Grievous Angel” by Lucinda Williams and David Crosby, and a lovely Gillian Welch-y “Hickory Wind,” appropriately by Gillian Welch.

After this album, I acquired a few Gram Parsons recordings, including The Byrds’ “classic country” album, Sweetheart of the Rodeo (1968). I like this album. I don’t love it, but it’s fun to listen to every now and then. Initially, the track that spoke to me the most (in a positive way) was the cover of the song, “You’re Still on My Mind.” George Jones released this song in 1964, however, it was originally written and recorded by Luke McDaniel (who also recorded as Jeff Daniels) in 1959. Freakwater also covered the song on their album, Dancing Underwater (1997).

So here we have a bounty of “You’re Still on My Mind”… The George Jones version has a lot of sliding fiddle, but no actual guitar slides, and is the slowest and saddest of the bunch. The Byrds version on the album has a fun piano part, but the only version I could find unfortunately doesn’t have the piano on it. It does, however, have some twangy guitar. The Freakwater version features the pedal steel, and in my opinion, is the most fun of these versions. Enjoy!

Finally, if you’re interested in hearing the original version of the song as recorded by Jeff Daniels/Luke McDaniel…

*There’s a great deal to be said about Gram Parsons and alt.country, the way that alt.country embraced him, and how his version of “country” was an acceptably “cool” version of country, but maybe we’ll get around to that later around here.

What I’m talking about…